I’m actually in Bellevue, but Seattle is a city most people recognize without explaination. I figure I have a week here to enjoy the family and get things together for my trip, though things are flexible.

Of course the first priority is to be with my daughter and family. The baby Has changed a lot since I was here in December. Now she smiles and laughs and is very aware of what is going on so she is very fun. This morning I stayed with her while my daughter took her husband to the bus stop, so we played “selfie”. 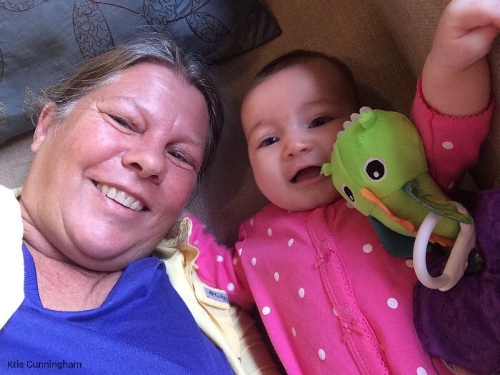 The bike and I arrived last night without too much incident. Connections were tight in Atlanta so by the time I cleared customs they were boarding my next flight, and I was hoping my baggage had time to get on the plane too. I had enough time in LA to relax a bit, but I was glad to get on the final flight. Unfortunately there was a problem with the captain’s seat belt and the only way to fix it was to replace the whole seat which took an hour. There were a lot of people with connections to Vancouver and Ancorage but thankfully they were going to hold those planes because there were no available seats for them on flights the next day. The flight was fine though once we got underway. We landed and made our way to the main terminal only to be stopped as we got off the tram because there was some security incident in the airport and everything was on lock down. We waited about a half hour until the all clear was announced, and never did learn what happened.

No matter though, because by the time I made it to baggage claim there was my son in law with both my duffle bag and my bike. Whew! The box was a bit torn up and the bottom was sealed with “inspected” tape but looked basically ok.

I slept fairly well, though I did wake at 4:30 with the old – what are you doing going out there without even knowing where you will sleep??? nonsense again, but managed to get back to sleep after a while. Today, besides hanging out with my daughter,  playing with the baby, and catching up with some things on line, I got my bike back together and got my new tires on, almost. It took the strong hands of my son in law to get the final bit of the tires on the rims, but now everything is in working order. It feels good to have my bike.

I am happy to report that the weather isn’t bothering me. Of course it is colder than what I am used to, in the 50’s today, but I have been comfortable in an undershirt and regular shirt even outside doing some yard work. I should be fine biking, but I do need to get a rain jacket for wet weather.

Tomorrow, besides playing with the baby, I want to visit a bike shop and start working on the list of a few more things I need, and make a decision on my route for the first few days and figure out where I will stay. I also need a sleeping bag liner so I can try sleeping in the tent. But, all in all, I think I’m about where I should be at the moment and it sure is nice to be here with family.

We live in David, Chiriqui Provence, Republic of Panama! This blog is about some of our experiences in our new country.
View all posts by Kris Cunningham →
This entry was posted in Uncategorized. Bookmark the permalink.

10 Responses to In Seattle